skip to main | skip to sidebar


“O most Holy One,” the little one lamented. “You gave me these beautiful wings with which to soar the heavens. I am so ashamed: one of them is broken.”

The Heavens were silent and the little one nearly lost hope. “What can I do?” he wondered. “What can I do, damaged as I am? There is no place in this world for butterflies with broken wings.”

As he contemplated his fate, he noticed sister bee, busily hopping from flower to flower, collecting pollen to feed her brood, fertilizing as she went. “Her wings are not colorful at all, nor do they span as broadly as mine,” the little one thought automatically, used to being monarch of all of the winged.

But then he remembered his plight and felt a deepening sorrow.

“How could the Holy One allow this to happen to me?” the angry thought burst forth. “It simply is not fair.” But again he felt ashamed, knowing that the ways of the Holy One are beyond the knowing of the small.

The little one considered. “Perhaps I could pollinate too. Surely I would not be as efficient as sister bee who was made for such work. And I could not go far with my broken wing…”

He thought some more. “If I could pollinate even a few flowers, certainly that would serve the Holy One better than giving up and dying.”

And so, with a newfound humility, the little one began. He was much more accustomed to being admired than working hard. He was not sure just what to do or how to go about it.

To his surprise, sister bee quickly noticed, joined him and taught him what to do. Soon, he was so busy that he forgot all about his own lost glory. He found joy in helping the Holy One create beauty amidst the growing things.

The day was nearly over and the little one grew tired. Evening Sun shown deeply through his stained glass wings. Yet the little one kept working. “I want to give the Holy One fitting praise, for new life has been given me this day.”

“They are mine,” said the Holy One, at last breaking His silence. “They too are mine. Come along now, little one, come.”

The Holy One bent to scoop up the stiffening body of the little one and whispered, “I take you to My home where we soar the heavens without wings. No longer can you be broken. For now you are truly mine - as I am yours.” 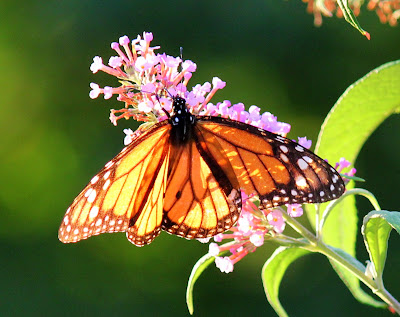 For a closer look, click on the image. The broken wing is the upper right wing. Of course, it no longer matters :-)

(If you would like to jump to the future and read the sequel to this story, click here.)
Posted by mary at 10:45 PM

Newer Posts Older Posts Home
Subscribe to: Posts (Atom)
This blog is no longer growing (i.e. adding new posts). However, you are welcome to make yourself at home and look around.

mary
I have created this blog to share some reflections and ideas. I have set it up so there are no comment opportunities or list of visitors so as to preserve the confidentiality of any patients who may want to visit the site. My blog is just that: my blog. This site is not intended to be a source of psychological treatment nor does it take the place of professional consultation with me or other mental health providers. (Psychiatric emergencies should be handled by calling 911, suicide prevention, going to an emergency room, etc.) However, I hope some of these thoughts may bring a sense of comfort or hope. By incorporating spirituality into my reflections, I am not trying to convert anyone to my belief system and I respect and cherish the diversity of beliefs my patients have.

Visit my photo albums:
http://picasaweb.google.com/110446234989597027251
Looking for one of my videos? Check my YouTube channel: http://youtube.com/1pgfwabf
View my professional website:
www.marybentonphd.com